The Pitfalls of HUD’s Point-in-Time Count 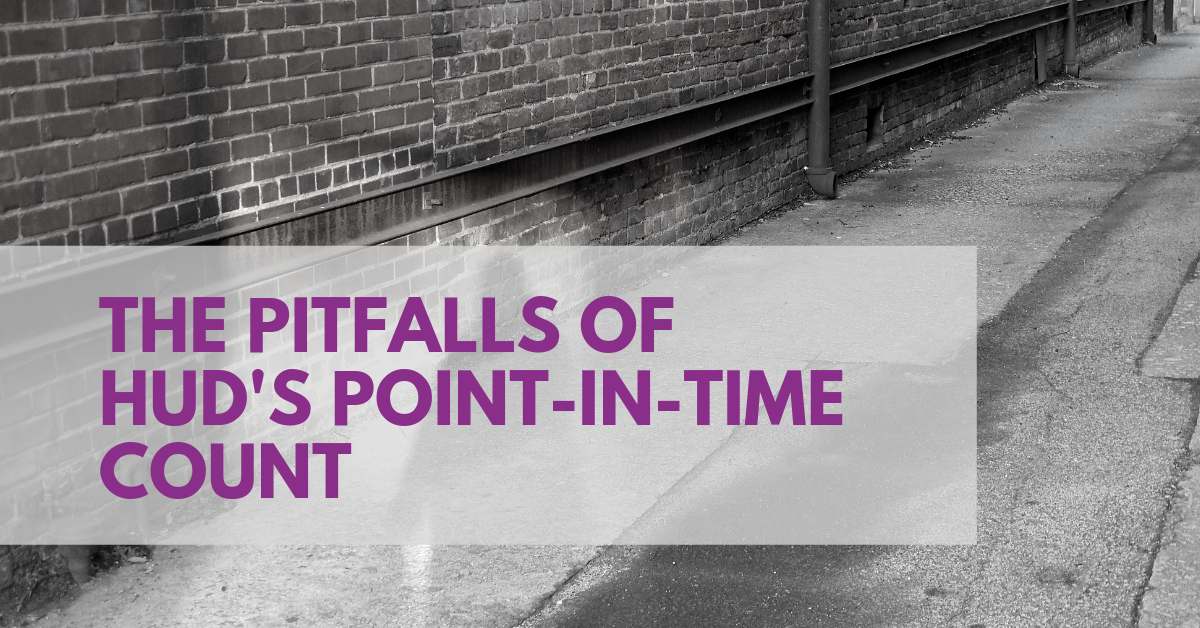 On January 7, 2020,  the U.S. Department of Housing and Urban Development (HUD) released its 2019 Annual Homeless Assessment Report Part I (AHAR), boasting decreases in both family and youth homelessness. This assertion was challenged by providers who work directly with families and youth, including early childhood programs and educators in our nation’s public schools. These educators and providers confront a very different reality – as do the children, youth, and families who are rendered uncounted and invisible by HUD’s data.

In this article, we explain why HUD’s data are flawed and misleading, and why other federal data sources provide a more accurate picture of children, youth, and family homelessness. This topic is important because Congress and local communities use these data to set critical priorities for funding, services, and action. It is also important because until children, youth, and families are accurately reflected in all federal data, they will be under-served, which perpetuates adult homelessness.

As our analysis shows, policymakers and the public should view HUD’s homelessness data with extreme skepticism, particularly with respect to children, youth, and families. Communities should look to a variety of other data sources — especially public schools, early childhood programs, and youth-serving programs — to get a fuller and more accurate picture of the prevalence of homelessness and the needs of those who experience it. Finally, Congress should act to remove barriers to HUD Homeless Assistance for children, youth, and families by enacting the bipartisan Homeless Children and Youth Act (HR 2001).

The Annual Homeless Assessment Report Part I (AHAR) provides estimates of people who are in shelter and in unsheltered locations on a single night. These counts, known as the Point-in-Time (PIT) counts, are conducted by communities nationwide, and typically occur during the last week in January of each year.

HUD’s 2019 Annual Homeless Assessment Report Part I (AHAR) estimates that on a single night in January 2019, 53,692 parents and children were experiencing homelessness. According to HUD’s numbers, this is a 5% decrease from 2018, and a 32% decrease since 2010.

However, other public systems report significant increases in child and family homelessness.

According to HUD’s 2019 data, 35,038 unaccompanied youth (youth who are not with their parents or guardians) were experiencing homelessness, a 3.6% decline since 2018.

HUD’s Data and Methodology Account for Only a Fraction of Families and Youth Experiencing Homelessness, Excluding Many of the Most Vulnerable.

Lack of Appropriate Shelter Options, Fear of Child Welfare Authorities and the Safety of Shelters, and Reductions in Transitional Housing Explain Why Most Families and Youth Who are Homeless are Not in Shelters or on the Streets.

For Children and Youth, Staying in Hidden Homeless Situations is as Harmful as Staying in More Visible Situations.

HUD’s Flawed Data Contribute to Harmful Policies and Conflict with Other Agencies’ Missions and Mandates.

Congress and local communities use federal homelessness data to set priorities for funding, services, and action.

“Those of us who are committed to care for children must be concerned about the misleading nature of HUD’s PIT count process.  Because the count process considers only shelters and visible street homelessness, the count of children and families is mostly reflective of system capacity, not true community need.  When we undercount, we underplan and underserve – which increases trauma and perpetuates poverty and instability of the families.”

“Not counting youth who are unstably and inappropriately housed as homeless drastically undercounts the number of youth who are, in reality, homeless.  Young people who are couch surfing are extremely vulnerable to all sorts of trauma, including human trafficking.  In our programs funded through Fairfax County and the U.S. Department of Health and Human Services, we can serve these youth, and those programs are full with waiting lists.  Our average wait list each and every month is approximately 30 young people who want a safe home and the help they need to move forward in life.  If we don’t’ provide that help, we are fueling the next generation of chronically homeless adults.”

“We get as many as 175 calls in a month from homeless women seeking shelter.  Over half are women with children. Sadly our family program is small, and in Baltimore many of the available shelter programs to families have shut their doors in past years.  I worry that these women and their children are forced to stay in unsafe conditions and with unsafe people due to the lack of resources in our community. I am sure most of them are living among the hidden homeless and not being ‘counted’ in our local PIT count.”

“HUD’s definition of homelessness are derived from a scarcity framework—one that misconstrues the severity of the issue in the name of limited resources. As a result, these numbers create a gross distortion that ignores the reality of homelessness and housing instability for millions of people across the country, especially young people. Ending youth homelessness hinges upon capturing its prevalence accurately and investing in its solutions proportionately. That starts with passing the Homeless Children and Youth Act (H.R. 2001).”

“Philadelphia’s PIT numbers under-report thousands of youth and families who experience homelessness. The School District identified 7,112 children and youth who experienced homelessness in the 2017-2018 School Year, compared to the 1,271 children under 18 years of age identified by the PIT count in FY 2018. As a result, Philadelphia devotes very few resources to addressing youth homelessness. In addition, the City “diverts” or “prevents” families away from accessing emergency housing, but does not consider that number in its PIT calculations. These experiences undermine Philadelphia’s ability to adequately address family and youth homelessness.”

“Santa Barbara County’s most recent Point in Time count (2019) showed a 30% decreased in the number of sheltered homeless and a 26% increase in the number of unsheltered homeless, in part because a primary shelter provider for individuals has cut beds and will only accept people from the coordinated entry system, which has proven to be a significant barrier to service access. Even though our agency has a waiting list of families that are doubled up without lease protections, our Continuum of Care (CoC) refused to use this data because it does not meet HUD’s definition of homelessness. Once again, our CoC is painting an inaccurate picture of homelessness and making the problem worse while it scrambles to satisfy HUD requirements.”

“In 2017 and 2018 we served over 200 families, which represents some of highest numbers in our organization’s thirty-three-year history. In 2019, we’ve had almost 700 families call for services, with 113 families currently on our waitlist. Our shelter capacity is limited to 23 rooms and there simply is not enough housing to resolve the homelessness. These children and families remain in the shadows, just outside the reach of supportive services. The real difficulty is, we will serve over 200 families this year, yet 800 plus families will call for services. How many of those 800 families will end up in any system-wide count? The PIT is problematic at best, but especially problematic for families and youth who are doubled up and couch surfing. Those populations will never be fairly represented in the PIT count.”

The bipartisan Homeless Children and Youth Act (HR 2001) addresses shortcomings in HUD’s data and other policies on homeless families and youth. It aligns HUD’s definition of homelessness with those of other federal agencies and permits communities to use HUD homeless funding more flexibly to assess and serve the most vulnerable homeless children, youth, and families identified in their area. While the legislation is focused on children and youth, it ultimately would reduce homelessness among all populations by helping to prevent today’s homeless children and youth from becoming tomorrow’s homeless adults.

Help Homeless Children and Youth, No Matter Where They Sleep