Youth Homelessness & Queer Identity: There is No Single Story 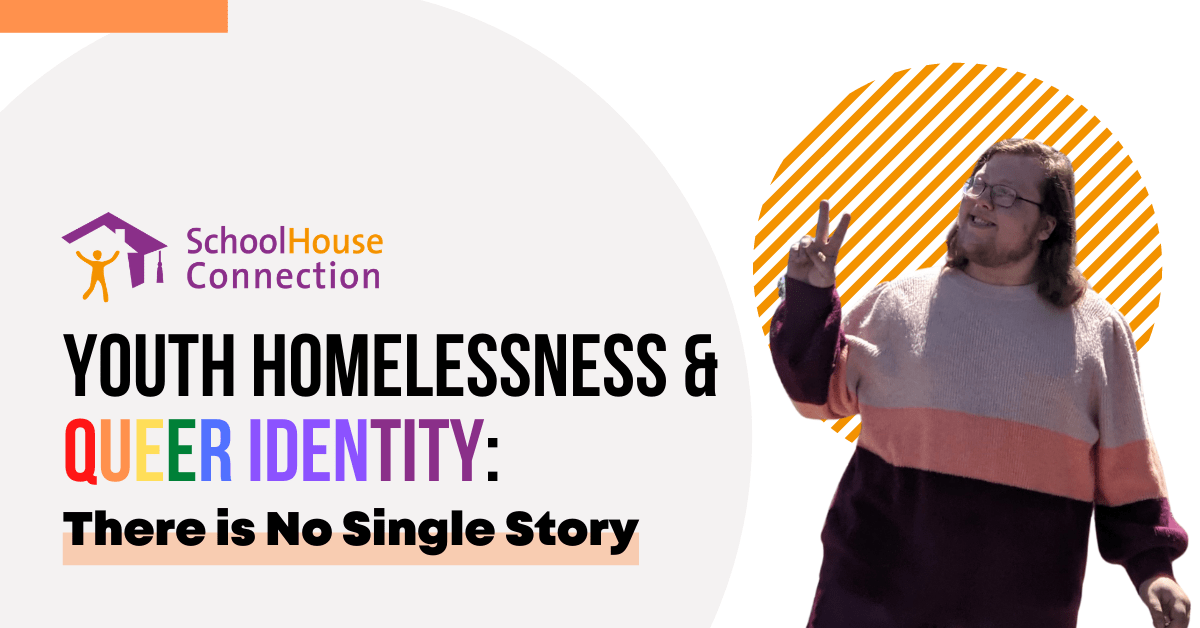 When I’m watching or reading queer media, I can be sure that at least one, and sometimes multiple, of these things will happen:

1. One or more LGBTQ+ characters will end up being abused or dead.

2. A transgender woman will be portrayed as a perverted serial killer.

3. An LGBTQ+ teenager will be kicked out of their home, and they will become homeless.

The impact that Hollywood and advertising agencies have on the way queer people’s lives are interpreted by non-queer people is far-reaching, and decades of inaccurate and incomplete representation of our complex lives have contributed to these being some of the most salient images that come up when people think of what it is to be gay. If you’ve seen Chimamanda Ngozi Adichie’s TED Talk, “The Danger of a Single Story,” then you know how harmful it is when people only have one idea of what it means to be something. Whether that is a specific race, sexuality, or gender, when one or a handful of tropes dominate the public perception of that group, it is hard to think of them as anything other than a stereotype. I can’t speak as to how much this public perception of the Queer community contributes to LGBTQ+ youth homelessness, but I can say confidently that it does.

Getting kicked out of your home is a fear that many LGBTQ+ children have when they are in the early stages of coming out, and it certainly was a fear for me, but it did not come to pass. I came out as gay gradually, first to strangers on the internet, then to my close friends, and then on Facebook to my entire family on Thanksgiving Day. I remember that the day went surprisingly well, as certain members of my family that I expected would disapprove were actually supportive, or at least trying to be. But when I went back home with my dad, the first question he asked me was, “Is it true?,” and I, of course, said yes, and then for the next week he was noticeably different around me. He tried to engage with me much less and was quicker to anger, and in a household where I was already experiencing abuse, the changes in his behavior weighed heavily on me whenever I was around him. Eventually he brought it up again, now asking me how I knew for sure that I was gay, if I was doing it for attention, and if I wanted to “suck dick.” All a barrage of personal questions and invalidation, when what I needed was support. So I didn’t get kicked out per se, but my sexuality contributed more and more to my abuse to the point where I had to get out of there by any means possible, and so my sister and I went to live with our mom, who lost her home less than a month later.

“Wherever I stayed and whoever I stayed with, regardless of their intent, if they learned about my sexuality, it still put me in the vulnerable position of unstable and inconsistent housing; and when I was already vulnerable, I felt like I needed to obscure that side of me as a means of exercising control in my life over what little I had authority: the story that I presented to others.”

It was a long time before I let my queerness be visible, as I felt safer to hide the fact that I was gay, especially while I was homeless, so my mom had an easier time accessing resources that might otherwise be closed to us in a community that didn’t seem to prioritize the safety of LGBTQ+ people. Wherever I stayed, and whoever I stayed with, regardless of their intent, if they learned about my sexuality, it still put me in the vulnerable position of unstable and inconsistent housing; and when I was already vulnerable, I felt like I needed to obscure that side of me as a means of exercising control in my life over what little I had authority: the story that I presented to others.

Through kind friends and family, as well as transitional housing programs, my mother was able to find a long-term and stable environment for my sister and me, and through SchoolHouse Connection I learned how to gain access to tools to prevent myself from reverting to homelessness now that I am on my own. It’s so common for aspects of someone’s queer identity to compound on one’s homeless experience and create emergent struggles that are unique to gender and sexual minorities. It can often bring about or reinforce abuse, or limit the resources you are able to access. Regardless, being a part of a community of queer friends has brought me incredible joy and fulfillment since then. If you are a queer or questioning young person and you have experienced homelessness, there are people who are waiting to fully embrace you, and you don’t have to change or hide who you are to be loved unconditionally. We’re here for you.