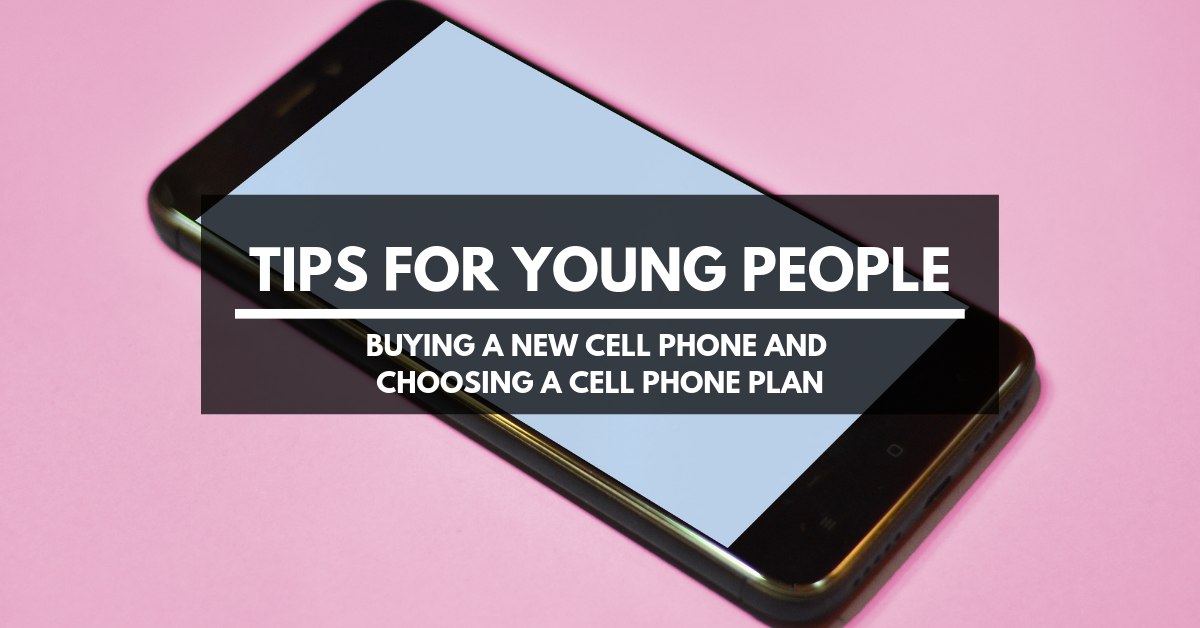 For additional tip sheets for young people on other topics, click here.

What are some things to consider before purchasing a phone and picking a plan?

What do I want and need to use a cell phone for?

For some people, cell phones are just communications devices. Those people just want to be able to make calls, send and receive texts and emails, and maybe check Facebook or other social media. Other people need or want to use a cell phone for much more than just communications. For instance, they may need a phone for internet access, so that they can do school research with their phone. Still others want to use their phones for games and other data-heavy uses. It’s important to try to be clear about your wants and needs (and to make sure that you can afford what you want). These wants and needs will strongly affect your choices and the costs you’ll face.

Do I need a new phone?

You may already have a phone. If so, you’ll need to consider whether you can and should use it for a new plan. Have you paid the phone off or do you still owe money for it? Is it working well? Is the battery dying? Will it work with a new provider or on a new plan? Do you need to have it unlocked in order to use it with another provider? If you have a phone but need a new one, you may be able to trade it in when you sign up for a new plan.

Which phone should I choose?

You will want to get a phone that is going to be adequate, at least for a few years. The phone needs to work on your carrier’s network. It can be very helpful to buy a phone that is unlocked and that can work on multiple networks. That will make it easier to switch carriers and take your phone with you when you do. When choosing a phone, you’ll also need to consider the phone’s operating system. Right now, the big choices for Smartphones are Android and Apple iOS. We don’t have any advice about which to choose. This seems to be mainly a matter of comfort and personal preference.

How should I pay for a phone?

Not too long ago, carriers would sell a phone at a big discount as part of their plans, locking you into a two-year contract that covered both the phone and the cell service. Those contracts are a thing of the past. Now, when you choose a phone, you have several options that do not necessarily tie you in to a long-term commitment to any particular carrier. There are three general options now for paying for a phone. You can pay the entire price of the phone up front. This can be very costly depending on the phone. If you are opting for an inexpensive phone, however, this can be a very good choice. It will result in lower monthly bills (because you won’t be paying installments on the phone), and it may make it easier for you to switch carriers and take your phone with you. It also can be a good choice (maybe the only one) if you have credit problems.

Another option is to pay for the phone over time in installments. Typically, providers offer 24-month installments plans that divide the cost of the phone over 24 monthly payments. You will want to read the terms of the agreement with the carrier carefully so that there are no surprises if you make a late payment or want to accelerate your payments so that you can own the phone outright sooner. Finally, carriers offer leases. Leases are different from installment plans, because leases include interest (which adds to the cost of the phone). Some people who like to replace their phones more often than every two years opt for leases. Again, read the fine print closely.

Should I go for a low-cost prepaid plan?

If you need a cell phone simply for basic communications needs, you may find that a very basic (and inexpensive) phone paired with a prepaid calling plan will work fine for you. Carriers such as Consumer Cellular, Republic Wireless, Cricket (a subsidiary of AT&T), and Ting may be good options. You’ll still need to make sure that the carrier you are opting for actually provides good coverage in the area where you’ll be using the phone.

Which carrier should I choose?

As we write this tip sheet, the government just approved the merger of Sprint and T-Mobile, which are two of the four biggest cell phone carriers. If Sprint and T-Mobile complete the merger, there will be three major carriers—AT&T, Verizon, and T-Mobile (which is what the combined Sprint and T-Mobile will be called). These carriers provide the best coverage and are the main players in the industry. Their coverage and plans differ from each other, so you’ll want to do some research to see which one provides the best coverage in your area, and which one offers the data plans that best meet your needs. But these are not the only options. There are other, smaller carriers that may provide coverage in your area, and offer plans that cost a lot less than the plans offered by AT&T, Verizon, and T-Mobile. How do you find these other carriers? Try Googling for information on carriers and plans from reputable sources like Consumer Reports. Here’s a link to a 2019 Consumer Reports guide to low-cost cell-phone plans. Consumer Reports updates this information yearly. You can also get good information about plans from Whistle Out or MVNO News.

Is there a trial period?

Some cellular carriers offer a limited trial period during which you can try out your phone and calling plan. Find out if your carrier offers this trial, which is likely to be no longer than 30 days–if that. If you do get a trial period, use the time wisely. Use your phone in as many different locations as you can, such as where you live or are staying, at school, on your usual commuter routes, and at any places you frequent, so you’ll know if your service works where you need it.

What will it really cost?

Remember that the quoted monthly rate may not include taxes and state and federal fees, which can add 20% to your wireless bill. In addition, if you are buying or leasing a phone from the carrier who is providing the cell plan, the monthly installments or rental for the phone will be part of the bill. Before you sign up for a plan, ask for an estimate of your actual bill, with taxes and fees included, so you’ll have a better idea of how much you’ll really be paying each month. It can be a good idea to ask about discounts–some carriers offer specials for college students.

Are there group plans that may work?

Though the process differs between carriers, some cell phone companies will let you create a “group” or “family” plan that can help each participant save on their monthly bill. For instance, Cricket offers group plans with convenient payment options. Although only one bill is generated for each group, individuals in the group can make their own payments without accessing the primary member’s account. Cricket plans have a quick pay feature that just lets each member put in their number and send a payment. It’ll credit the account associated with the number, so there is no need to give out the primary account holder’s login to everyone in the group. Other companies may have their own convenient group plans and/or payment options. Discuss this with the carrier and be sure to consider whether any group plans the carrier offers will provide sufficient data for your entire group.

What types of minutes and data are included?

Even if you don’t opt for an unlimited calling plan, your carrier may offer you unlimited calls at certain times of the day or week. Some offer free nighttime calling, for example, while others offer free weekends. Make sure you know exactly when any such free calling periods start and end.

What are some other things to consider?

1. Hidden fees. Some fees on your cell phone are mandatory, whether you authorized them or not. For instance, cell phone providers are required by law to include certain taxes on bills. However, not all of the “fees” that you may see on your cell phone bill are mandatory, and you should review your bills to make sure you aren’t being asked to pay for any services that you didn’t authorize. For instance, be on the lookout for charges for cell phone insurance or music services that you did not authorize. Ask about any of these additional services before you sign up for a plan and authorize only the ones you want to use.

2. Overage fees. One of the best ways to save money on a cellular plan is to pay only for as many minutes and as much data as you need. If you’re not a frequent caller, you may not need the unlimited calling plan, and if you don’t use a lot of data, avoid the expensive unlimited data plans. On the other hand, you should make sure your contract includes at least as many minutes and as much data as you plan to use each month. Overage fees for minutes and data can be very expensive and mount very quickly. Monitor your usage during the month so that you can avoid such fees. Some plans allow you to purchase additional minutes or data in any given month, without changing your calling and data plan. If you find that you frequently go over your allotted minutes or data, you may want to bump up your plan to a higher (and more expensive) level, rather than have to repeatedly buy additional minutes or data, or pay overage fees.

3. Data and messaging services. If you use your phone for messaging, social media, or accessing the Internet, you also should purchase an adequate messaging and data plan. If you’re a frequent texter, for example, you’ll want to make sure your messaging plan has you covered–otherwise, you could be charged on a per-message basis, which can quickly add up. Remember that you can be also charged for incoming texts, and if those texts include video links, they can quickly eat up your data plan. As noted above, if you go over your data allotment, you can end up paying a substantial amount of money for every megabyte of data you upload or download.

4. Roaming fees. Some carriers charge roaming fees when you venture outside of your carrier’s regular service area or go to a foreign country. Be sure you understand the boundaries of your calling area before you select a calling plan.

5. Optional bells and whistles. Think about the extras that are important to you in a cell phone: Do you want a quality camera? Long battery life? Plenty of storage? These add-ons may increase the price of your phone but can be worth it if you use it as a daily tool.

6. Upgrade and replacement options. While you may be satisfied with your shiny new cell phone right now, there’s always the chance that it could get lost or broken. Find out what options you have for upgrading or replacing your phone, and what kind of fees you’ll be charged in those situations.

7. Breakage prevention. Research shows that almost half of cell phone owners will accidentally damage their phone at some point. Plan ahead and get a high-quality protective case and screen protector that could save you big bucks in the long run.