Mirka wants to improve quality of life for Texans, starting with the energy sector. 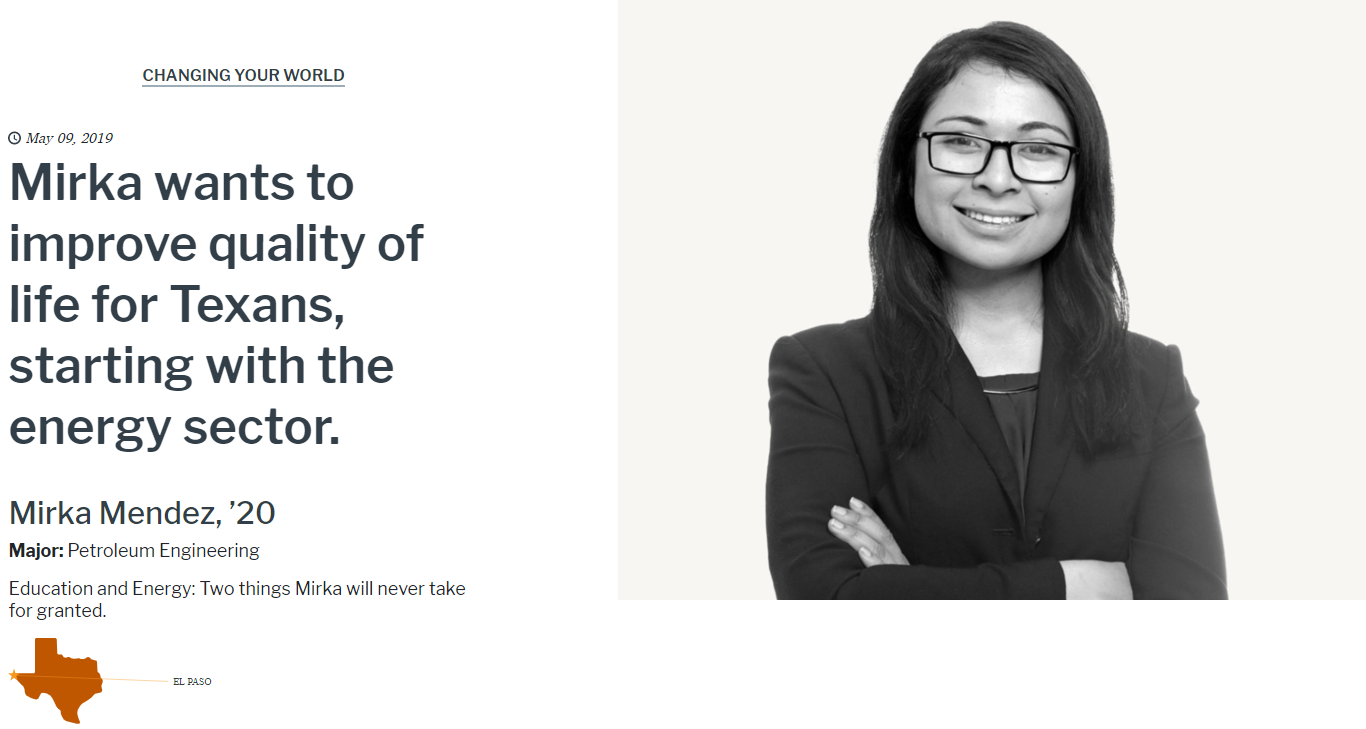 Engineering is science put into action. It is about designing solutions to problems that affect the quality of modern life. Mirka Mendez, a petroleum engineering senior at The University of Texas at Austin, knows personally how important that impact can be.

“I consider engineering as a service profession — as a way to improve society and meet the needs we have day by day,” she says.

As an undergraduate, she is researching how to make drilling safer and more efficient, and she gained hands-on experience during a field internship with Halliburton last summer. When she graduates, she will join the energy sector in Texas.

“Energy is a very important sector in our society, if not its basis,” she says.

Mirka’s passion for a better energy industry is a deeply personal story. Mirka used to be one of hundreds of thousands of homeless children in Texas. She has experienced life with scarce resources and wants to build a future where no one has to go through that.

Mirka became homeless at age 15 and struggled to complete high school without any financial or personal support. She found herself in impossible and at times toxic situations.

“I stopped working when I started to move frequently and didn’t know how long I was going to stay in each place,” she says. “I would walk several miles every day because I couldn’t afford transportation.” Despite her hardships, dropping out of school was not an option in her mind.

“I knew that education was the only way out,” Mirka says. “I wanted to be something more than what my circumstances predicted I would be. At least, that’s how I like to see it.”

Late at night in the shelters, she would focus on the future and her homework. With a passion for economics and innovation, she set her sights on petroleum engineering.

“The work is challenging but always very important,” she says, “and I’m a person who is driven by these challenges.”

In addition to her engineering work, she is an advocate for the education of homeless youths. She has worked with nonprofits, raising awareness as a public speaker and panelist and being involved with policymaking in Texas and Washington, D.C.

“I love stories of resilience, of people overcoming obstacles, stories that make you believe that everything is possible,” says Mirka. “I want to become one of those stories.”