Class of 2020: Future teacher found supporters and her voice at VCU 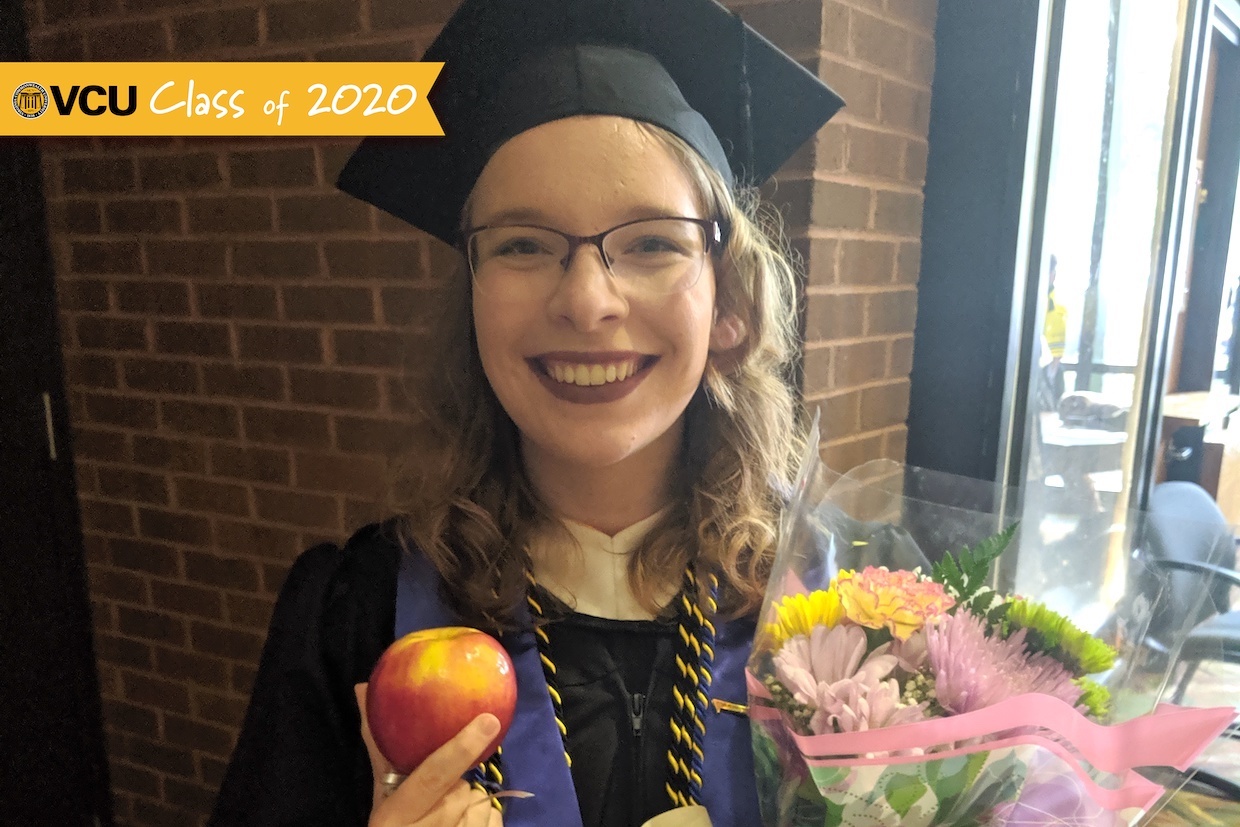 Class of 2020: Future teacher found supporters and her voice at VCU


Getting through college was a difficult but rewarding journey for Hannah Johnson, who experienced homelessness as a child and now aims to help her students become the best versions of themselves.

Hannah Johnson says she’s not really from anywhere. She was born in Richmond but moved around a lot outside of the city growing up. She attended classes in several school districts before ultimately staying in Ashland, Virginia. Her family battled homelessness, so Johnson often was moving among different motels and the homes of family members. She labels Ashland as her hometown, but it’s not the same as being “from” there, she says. She never felt rooted anywhere.

Virginia Commonwealth University was a pragmatic choice for college. It was close, and she knew she could find a way to get to campus. VCU also offered the Summer Scholars program, a five-week summer session that gives students a head start on their college career. That meant Johnson could live in a dorm and begin classes early.

“After bouncing around as much as I had been, that sounded wonderful,” Johnson said.

Navigating admissions was difficult. Johnson never toured VCU because she didn’t have the means to get there. She also didn’t have reliable access to technology or even the required documents that many applicants take for granted. There was no birth certificate, Social Security card or driver’s license.

“I didn’t have the documentation proving that I was human,” Johnson said. “We also were using so many different P.O. boxes and addresses that I wasn’t always getting information, like stuff from financial aid, in the mail.”

When she finally made it to VCU, she found just being there hard to fathom.

“I’d spent all this time just trying to get into college and I was here and I was overwhelmed,” Johnson said. “It was my first time really in Richmond that I could recall, and I was in a state of shock. I was happy, but it didn’t feel like it was real. I remember my first night in the dorm. I didn’t feel like what was happening was actually happening. It felt like I was living in a dream and I was living out someone else’s life.”

“That first day I met her, she was so excited to be at college,” said Bambacus, now student engagement and summer studies administrator at VCU. “She just had this huge grin on her face — she was really beaming — and I will never forget it.”

“I’ve worked hard to get here,” she said.

Johnson initially started at VCU focused on her interest in elementary education. During her first semester, though, Johnson realized that she missed history classes and that she wanted to expand her curriculum. She adopted a dual degree program, adding the history major to the mix.

“One of the reasons I wanted to come to college is because I like being pushed outside of my boundaries and I wanted to become a better writer and a better speaker and someone who could synthesize information and tell it to you in a way that you wouldn’t know that I had to read 30 or 40 books on the subject to say it in such a concise way,” Johnson said. “Taking that second degree was essential for me to feel like I was pushing myself while I was here, and I loved my history courses. When you find your passion, you find your passion.”

Johnson was active outside of the classroom at VCU, too. One of her college highlights, she said, was her involvement with Camp Kesem, a national organization that holds summer camps for children who have parents or caretakers with cancer. In addition to the fulfillment she felt contributing to an organization that helped others in need, Johnson took on leadership opportunities with the organization that proved eye-opening.

“That was where I learned to become a leader,” she said.

She also mentored new groups of Summer Scholars, most of them first-generation students.

“She began to flourish mentoring other students, especially other students who had experienced homelessness,” Bambacus said. “She’s been such a strong advocate for homeless students at VCU. She’s helped make changes at VCU based on her self-advocacy and her desire to help others.”

Still, Johnson said there were times her confidence wavered. She didn’t have the family background or support that many students have, and she struggled with feelings of being an imposter among the other students — of not belonging on a college campus. Fortunately, she said, she found support among classmates, faculty and staff. In particular, she points to the steadfast encouragement of staff in the Focused Inquiry program, where she had a part-time job; Bambacus; and Daphne Rankin, Ph.D., associate vice president for strategic enrollment management.

“There were people at VCU that were behind me a hundred percent and it just took me a while to see that,” Johnson said. “And once I did see that I was able to kind of make the most of VCU.”

Bambacus said the next step is an exciting one for Johnson.

“Hannah’s so brilliant and empathetic and loves helping others, but it’s more than that,” Bambacus said. “She sees the best in other people and wants them to succeed just like she’s succeeding. And so for her to be in a teaching role, to be able to have that sense of what her individual students need and how to give that to them and how she can help them succeed, I’m excited for all of her future students because she’s going to be an amazing teacher.”

Johnson sees her career choice as a fitting one — one where she can use her unique viewpoint to help kids navigate circumstances she intimately understands.

“The reason I wanted to become a teacher was because of the teachers I had when I was in public school,” Johnson said. “Growing up had always been tumultuous. I was that kid who was absent all the time. I was that kid who would occasionally be wearing the same clothes as the day before, or I was that kid that smelled like cigarettes. A lot of people in elementary and middle school, I think anticipated that I wouldn’t go to college. When I got to high school, I finally had teachers that wanted me to be the best version of myself. What they did worked, and it made me want to help others in the same way.”